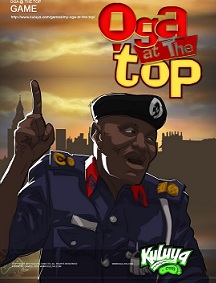 With #OgaAtTheTop still trending on Twitter and going viral over the digital space, Nigerians have transformed the Lagos State Commandant of the Nigerian Security and Civil Defence Corps into an emergency commedian. With the video posting over a hundred thousand views already (check it here), Channels TV proved its mettle again with this one after making former Nigeria President Obasanjo’s gangam style dance go viral.

Some people were born commedians and some had it thrust on them. When it comes to commedy in the digital space, Obafaiye Shem (the Lagos State NSCDC commandant) can scoot. Some people are catching fun on social media, providing valuable fun and getting paid in real life.

Another surging phenomenum is growing use of social media by comedians connecting with each other, their fans and followers.

At some time when we were in high school, the class jester was the black sheep; distracted us when discussing serious issues, they ‘owned’ the back seats in any class and generally had a little lesser self esteem among their nerdy friends – but that was then. Comedians are now more respected, attract big bucks, and are now regarded as part of the ‘celebrity’ triad of the entertainment industry; musicians, actors and commedians.

But Jokes apart, these individuals are also using social media to connect with their fans and followers, build reputation, promote events and generate revenue in new and unique ways. How have they been doing this? how are they building relationships with their fans? What can you learn from them?

With social media tools available, it’s pretty easy to discover people with great talents for making others think or laugh. For this one, I will use @AkposWarriboy, @LaughorYawn, @WaZo_Bia, @Gandoki_ and the gbagaun finders @GbaGaunDeteC and @GbaGaunmaster.

Another approach these creative commedians are using is to own channels on YouTube and to use them in posting web video series. I accuse Ay the commedian for making this concept popular among them commedians. With active collaboration of several A-list actors and actresses, Ay has built a robust dossier of skits that will make anyone roll over in laughter. You can check his YouTube channel here.

Others with robust channels include; Basketmouth, Julius Agwu and Bovi

3. Blogging to Relevance:
For people who do a lot of speaking, having a blog might be a very difficult task. Ogus baba clearly has this locked in as his blog has built a reputation for delivering funny, witty and creative jokes, images and skits in the Nigerian cyberspace. Gbagaun detector is also another great online platfoem to check out.

4. Edutainment vlogs:
Should I call them commedians? Several of these creative individuals have also begun to use creative ways to entertain and educate Nigerians home and abroad.

Apart form the way they help each other in retweeting jokes and building their fan base, pne thing that is impressive is the virtual community they are trying to build around one another.

Most notable of the active Twitizens include, Basketmouth, Ay, Gordons, tatafoo,klint da drunk, Jedi, Seyilaw. The appear to dedicate times to postingjokes while the others are committed to retweeting them. Talk about Twitter parapo.

This seems to be a great catch on from the innovative ones as they use short videos and skits to keep their brand alive. Ay the Commedian uses his skits to promote his brand and Bovi recently used several skits featured on YouTube to build awareness about his standup commedy show, BOVI Man on Fire

7. Reaching Out to Bloggers to deliver content:
Bovi, Basketmouth and Ay turn to other bloggers in order to get the word out about their events Bovi-Man on fire, Big Friday and Ay Live ? Ay’s Crib respectively. Leveraging on personal contacts, bargains and paying for adverts and blog posts thay get to promote awareness and build traffic for their events.

In addition to using radio and sometimes TV, comedians are turn to social media to establish their reputation, prove their worth and building traffic for events. This they through the use of social channels to connect with fans, offer value, and build followership. I really look to more innovative applications of social media including events collaboration with fans, livestreaming, building digital communities or email lists for people absolutely subscribed to comedy content.

What are your thoughts about these sudden twitter savvy commedians? What other unique social media approaches have you identified? You can leave your thoughts in the comments below.

wont to join your association

poverty can can you dream even when you are not sleeping